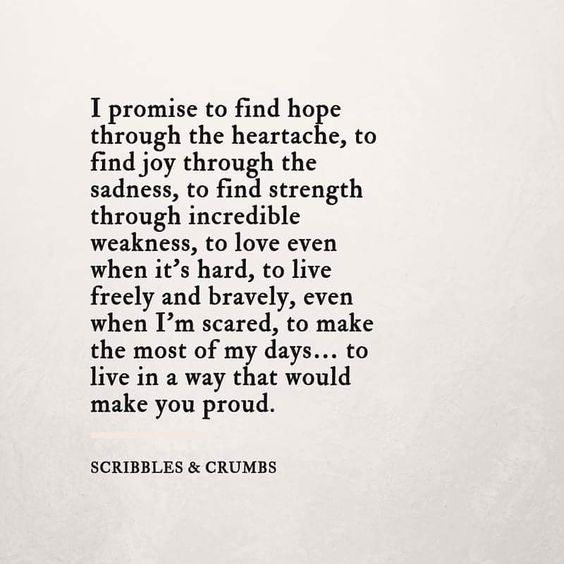 I’ve been a big fan of Ricky Gervais ever since the British version of “The Office.” I chuckled through his podcasts, laughed through “Extras,” and guffawed through his standup comedy. His irreverent humor appeals to me. Yes, he’s often brutal in his attacks, but I guess I have a dark side. Lots of people were offended by his Golden Globe jokes, but there’s so much honesty in his humor that I find it refreshing – even as I cringe.

When my friend Jo told me I had to watch “After Life” on Netflix, I wondered how Ricky could possibly make me laugh about the death of a spouse. No way. It’s too personal; it’ll hit the rough spots as I try to make my way from grieving widow to sanity. But I gave it a shot because it’s Ricky, and as I said, he’s an honest, if brutal observer of humanity.

And – wow – he did hit the rough spots! Beginning the show with a video of his dead wife advising him how to go on without her? I’d kill for a video of my late husband telling me his thoughts from beyond the grave. But cancer? No, this is hitting a bit too close to home. I wasn’t sure I could handle this show.

I bravely kept watching, and I’m so glad I did. Ricky gets it. He gets the disorientation, the magnitude of the loss, the grief that can’t be shaken. He gets not wanting to go forward without the one person who was perfect for you. He gets the anger and the bitterness and the constant questioning whether or not to truly make the decision to live without your soulmate. Because we all really do have to make that decision, admit it or not. As Ricky’s character Tony says, “I’d rather be nowhere with her than somewhere without her.”

I’D RATHER BE NOWHERE WITH HER THAN SOMEWHERE WITHOUT HER.      — Tony, After Life

I remember a few weeks after my husband died, sitting in my car in the garage thinking, I could just close the garage door and leave the car running. Okay, it was just a thought, and my inherent sense of self-preservation plus the tiny spark of hope that life was still worth living made me horrified that I had even considered it. No, I told myself. I have a life. I have a world still filled with people I love and who love me. I have a future, albeit one I can’t imagine without Rick. I may not be thrilled about how this turned out, but it is what it is. Let’s just give it some time. Let’s just see if I can find new life without the person I want to be with more than – well – life itself. So I shut off the engine and got out of the car. But I had to make a conscious choice to move forward through the darkest hour of my life.

In the beginning of “After Life,” it’s clear that Ricky’s character has decided against going on, against living. He’s only alive at this point in the story because he couldn’t stand the thought of leaving his dog, but he makes it known that it’s a temporary situation, and he’d be more than happy to end it all. Despite this downer of a premise, the result is a show that made me laugh and cry intermittently for three hours. This roller coaster of a plot tapped into my raw emotions. Not only is Tony a widower, but he also has a dad with Alzheimer’s, an affliction that killed my father seven years ago. Watching Tony navigate life after his wife’s death on top of the frustration and pain of his dad’s altered mind state had me laughing out loud one minute and sobbing the next.

And, no spoilers, but at the end, I was left with a sense of peace about life and love and death that compelled me to rewatch the show a few weeks later when I was having a couple of down days. I knew that watching “After Life” was the perfect antidote to the doldrums, because it’s a slice of the darkest moments of real life with just a drop of hope interspersed throughout.

I’ve even downloaded the song from the show’s brilliant most sob-inducing episode, and I play it whenever I want to pause, think, reflect on life and death, and feel that sense of peace again. (Among the Living, by The Thorns)

After pondering its appeal, I think the show simply magnifies the myriad ways we choose to survive the death of someone we never thought we could live without. Deep down, maybe unconsciously, there is a choice we all make. Live or die. Anger and depression or acceptance and hope. Choosing to brave the pain, the sadness, the emptiness, and all the other horrific results of the death of a spouse, or not. Isn’t this a choice that every human makes at one point or another? Whether to keep on going after surviving a trauma, or losing a loved one, or weathering depression, in general? When life gets tough, don’t we all sometimes struggle to get out of bed in the morning?

If you’re a widow reading this now, you’ve made a conscious or unconscious choice to live. Sometimes it’s a tough choice. But, hopefully, the day comes when you enjoy life again – or at least find peace of mind and the knowledge that you’ll survive in the “After Life” that remains following the death of your spouse.

I’ve also come to a place where I can make a choice I never thought would be an option: the choice about whether or not to take time to grieve, whether to become mired in my sadness over Rick’s loss, or to choose not to “go there.”

At this stage (21 months), I have control over my mind that wasn’t available or possible in the earlier stages of grief. I was too overcome by emotions, too close to the edge of the precipice of sorrow. I gave into every memory and crying jag and made sure I was near an easy exit from social gatherings and highways so I could let the grief wash over me when it hit. Now, as I go about my day, something will trigger a memory (and there are still millions of triggers out there after two decades of marriage), but lately, I can choose to “go there” or not.

Sometimes, I let the memories take over. I take the time to remember it, to feel it, to grieve. But most times now, I’m able to make a conscious decision not to. Maybe I’m playing with the grandkids, or I’m driving home from a good day at work, or I’m enjoying a movie, and the thought pops into my mind – Oh, Rick used to love this, or Rick used to laugh about that – and I smile to myself and think, okay, but I don’t want to follow that train of thought right now, because it’s going to make me incredibly sad. I still miss him terribly, but right now I’m not going to go to the “I can’t believe he’s gone!” part of my brain. I can pull a Scarlet O’Hara and think about it tomorrow.

And, wow! That’s a place I never expected to be, back on that day in the garage, or the night I last stroked his head and kissed him goodbye. So, yes, like Tony, we make our choices. And I know now that despite missing Rick with all my being, I will have an After Life. 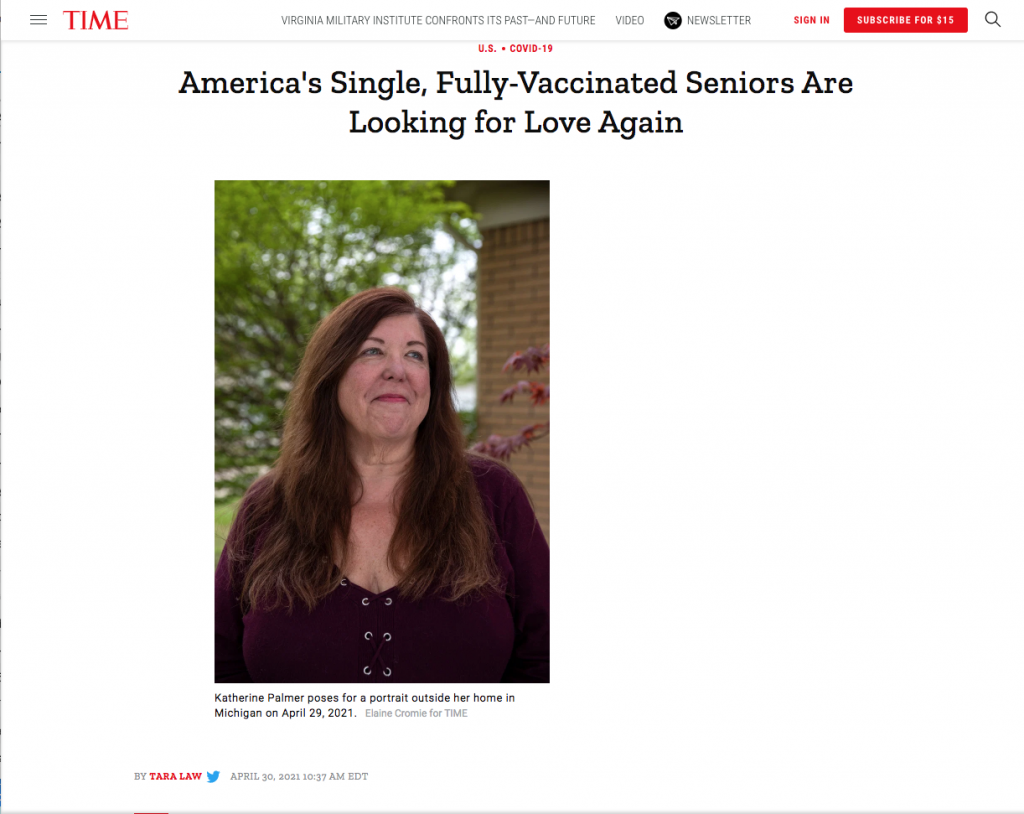 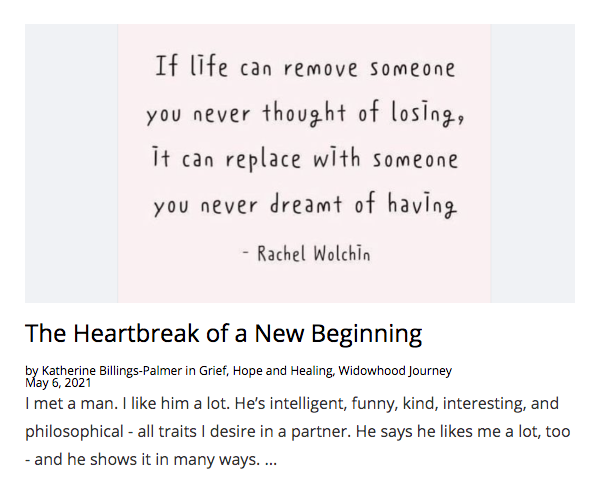 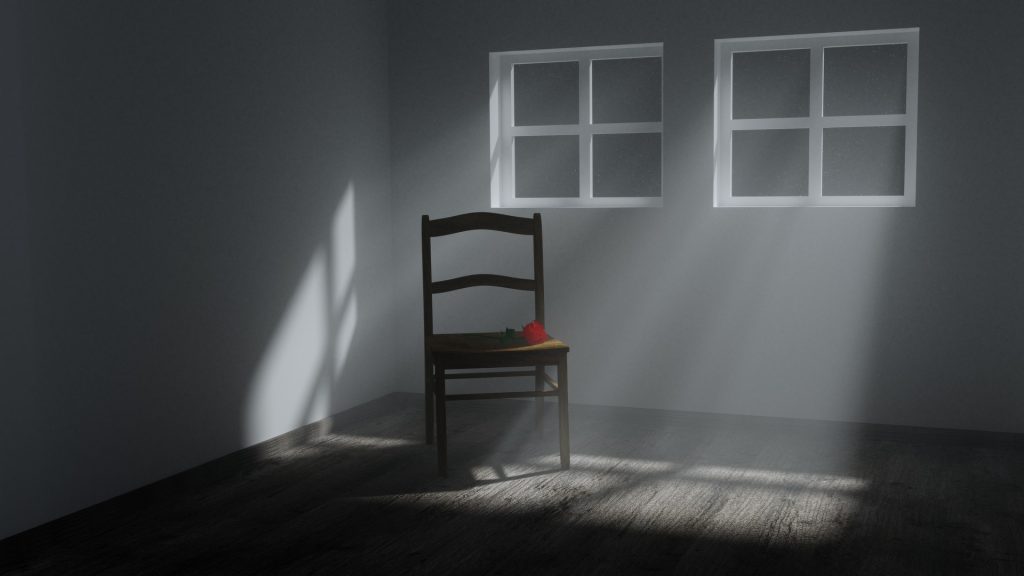